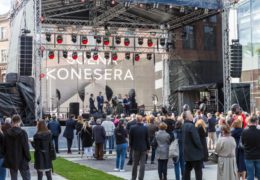 On 6 June, we had the pleasure to witness a truly grand opening of the “Sezam” store in Centrum Marszałkowska. The event was accompanied by the inauguration of the retail and services part of the building as well as the unveiling of a plaque commemorating Witold Rowicki, designed by a renowned graphic artist – Andrzej Pągowski.

BBI Development S.A, an official partner of the stand of the Capital City of Warsaw during the MIPIM 2018 in Cannes, is the only investor in Warsaw that will present three projects located around Plac Defilad during the largest European real estate fairs starting on March 13th.

Centrum Marszałkowska is a showcase of downtown Warsaw – the perch was mounted atop the building, which is to see the return of Sezam department store

The mounting of the perch at Centrum Marszałkowska has officially started the countdown until the opening of the best-located office and commercial building in Warsaw, sited at the junction of two largest arteries – Marszałkowska and Świętokrzyska Streets.

The prestigious company joins other tenants of Warsaw’s Centrum Marszałkowska, a project implemented by BBI Development S.A in cooperation with WSS Społem Śródmieście. The office and retail building located at the intersection of Marszałkowska and Świętokrzyska streets, integrated with the second metro line, has just reached the status of ‘raw state of development’, and will be available for use in April next year.

More than 86% of Koneser office space is leased

Plac Konesera will come to being

Plac Konesera will come to being.

A new place in Warsaw approved by Warsaw City Council.

Robert Lewandowski is training before qualifications for the World Championship in his new apartment at Złota 44, whilst enjoying the largest and most fascinating sports and recreational area in Europe

Robert Lewandowski, a captain of the Polish representation and one of the world best football players, emphasises that he has been enchanted not only by luxurious interiors at Złota 44 and an outstanding quality of furnishing, but mostly by the recreational and sports area that is not offered at any other apartment building in Poland and Europe.

On 27 June 2017, the Ordinary Annual Shareholders Meeting will be held. More information on the BBI Development General Meeting